For the past seven years, you have been with me every step of the way for each Boston Marathon, and for that I am truly grateful. Together we have raised money for endeavors that are close to our hearts like Dana-Farber’s Barr program in innovative cancer research. I have one more marathon to run, and I hope you will be a part of it.

We were all affected by last year’s Boston bombings in some way. It was a moment that will live with us for a life time. I was in the finish area when I heard the first explosion in the distance. A few moments later, smoke rose over the crowd, and a second, louder explosion went off, and my concerns of a possible terrorist attack became reality. Immediately, I was concerned for those who were hurt, and I feared that family or friends were among them. Heroes rushed in to save those in need and protected the thousands of people still in possible danger. For the next few hours, I slowly reconnected with my loved ones, finally learning they were safe.

While reflecting on the events of last year, I began to see a parallel between those individuals directly affected by the horrible events of that day and those who first discover their diagnosis of cancer. For patients, there are fears they will not survive. And for families, there is uncertainty that their loved ones will be ok and uncertainty of what the future holds. Our donations support the heroes at Dana-Farber who are rushing to help those battling cancer and searching for ways to prevent it.

I hope you will choose to honor these victims and their loved ones along with the heroes that work with them by donating today to Dana-Farber. The Dana-Farber Marathon Challenge directs 100 percent of funds raised to the Claudia Adams Barr Program in innovative cancer research. You may be able to double your donation though your company’s donation-matching program.

You can make your donations now online at http://www.runDFMC.org/2014/patricko.
I thank you for past support of my fundraising and would appreciate your choosing to support my efforts once again this year.

For more information about the Dana-Farber Marathon Challenge go to http://www.rundfmc.org/htmlcontent.asp?cid=116910

Tonight’s event was awesome.  Over 100 local runners turned out to run as one, in honor of the victims of the Boston Marathon.   This was my first “real” run since Marathon Monday.  It felt great running again, especially for a cause like this.  I think it’s helped all of us feel like we a helping in some small way. 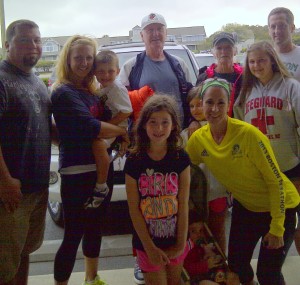 Tonight, my family and I along with 50 or so other families walked/ran in OBX runs for Boston!

I truly want to thank you for the many calls, texts and emails of overwhelming expression of concern for my safety, and the safety of my family, my Dana-Farber partner, Brendan Barrie, and other close friends. Your thoughts and prayers was heartening during this awful tragedy.

My heart aches for Martin Richard, Krystle Campbell and Lu Lingzi, the many others bombing victims and their families. You will always be a part of me with every run.

12 seconds. It was the time between hearing the first explosion, questioning if this could actually be a terrorist attack, to hearing the second explosion, confirming your worst nightmare. It was the amount of time you had to process where every one of your love ones are long the 26.2 miles and determine if they are they safe from harm. Staring down Boylston St, moments after the blast, I knew my family was in the center of it all. It wasn’t until 5 p.m. when I knew everyone was safe and I was reunited with my wife.

The magic of the Boston Marathon is not 27,000 runners participating in the world’s oldest annual marathon. It is how 500,000 people complete the marathon together. From Hopkinton to Boston, the marathon route is lined with spectators and volunteers cheering and helping every runner along the way like no other. They have one mission: get you to the finish line. Year after year, they are there for you and they never disappoint. For many of us, we couldn’t imagine running Boston without them. On this day, it seems we are one big family.

Monday, our family was attacked. Although we cannot truly empathize with those, whose love ones where hurt or killed, we mourn with you. I promise, we will keep you in our hearts. I promise, we will demand justice against those responsible for this horrendous and cowardly act. And as I struggle to do something, anything, I promise to run on Patriot’s Day, half a millions strong, for you.

There is something new in Raynham his year, a winter Fun Run in Raynham. This series will run each Sunday in January at 9:00am. The registration, start and finish is at the Lions club located on King Phillip St. For those that have been to the Summer Fun Runs in Raynham, this is the large white building across from the volleyball courts. The course is slightly longer, (about 4 miles), but covers much of the same route as the Summer Fun Run.

I hope to make a few of this runs if I do a Saturday LSR.  Hopefully you can make one.

As part of the Dana-Farber Marathon Challenge team, I have been given a great opportunity to be a part of a research study to examine the effects of marathon training on heart health.   Dr. Aaron Baggish from Massachusetts General Hospital and co-medical director for the B.A.A. Boston Marathon is overseeing the study.  Lucky for me, I fall in selected group (aka high risk category); male, non-professional marathon runner, between the ages of 35-65.

Study participation involves an individual fitness and heart disease risk profile before and after marathon training which includes a screening for heart disease. There will be two study visits to Mass General Hospital, one visit before and one visit after marathon training. During each visit participants will have blood tests, an electrocardiogram (ECG), an echocardiogram (echo) and a cardiopulmonary exercise test (CPET).

January 5, 2013 was my first appointment.  It was probably the only time in someone’s life that they are actually looking forward to an appointment with a cardiologist.  It started with some blood tests.  Stephanie, one of the clinical research coordinators, lightheartedly assured me she would leave enough blood so I would be able to complete the CPET.  I wasn’t so sure.   They sent me back to the waiting room with breakfast, a choco-walla bar and some water.

A short time later I was brought into the testing room.  It was a little chilly but I then realized I would probably appreciate it once the real work started.  When Dr. Baggish came in, he performed the echocardiogram.  While gathering the necessary data for his study, he was also assuring that I was fit to continue the study.   He gave me the thumbs up and I was ok to continue to the CPET.

Next they needed to get a baseline of my heart rate, blood pressure, VO2, VCO2, my heart’s electrical activity and sure a few more stats.  I was thinking, this could not have been a better baseline measurement.  I have not really exercised all summer.   My fall training was cut short due to a hamstring pull and the holidays have just finished, full of over eating and “holiday cheer”.  I was wondering if a was a better candidate for Nova’s Couch Potato Marathon Challenge. (If you haven’t seen it, I highly recommend it).

After hooking me up for the ECG and CPET, I definitely looked like something out of a science fiction movie.  I wore a mask that allowed measurement of my breathing that kind of something Darth Vader  would maybe wear to bed so he

didn’t have to wear that big helmet.   I wish I thought of asking if they would take a picture of me but didn’t, so this MGH photo will have to do.

I began jogging on the treadmill at 5 MPH and a light grade.  I’m not sure of the rate of change during the test, but the speed remained constant while the grade would increase over time.  At certain points they would take a blood pressure reading while I continued to run.   The computer screens where busy plotting the ECG graphs and displaying the many parameters being tracked during the test.

A laminated paper with chart ranging from 1 to 10 allowed me to point to the level of effort I felt I was exerting.  For the first 10 minutes, I was able to point to the low numbered, green region of the chart.   I wondered how long it take until I would stop pointing and use the universal 5 fingered stop sign to indicate I can’t go any further. Slowly the grade increased.  I had no idea if I was doing better than I expected, or it was a statement of what happens when you find excuses not to exercise.  As my finger moved down the chart and entered the red, I felt the production of lactic acid in my legs, and knew I was anaerobic.  It was only time before I hit my VO2max.  A few minutes later I was there.

After the test, I was curious of my results but most of it will have to wait until after the study is completed.  I am looking forward to both my personal changes after the end of my marathon training and the results of the study.  There have been a few popular studies published recently highlighting the risks and negative aspects of participating in endurance sports and the associated heart risks.  I hope this study will provide more insight either confirming or debunking this theory, but more on that later.

I’m looking forward to the Martha’s Vineyard 20 Miler on February 16th.  Last year was a good time, and we lucked out with beautiful weather.  This year we plan on making a weekend out of it.  Hope to see you there too!

The MV 20 Miler is a must race for die-hard runners of many levels. From highly competitive athletes looking for a test of their Boston readiness, to dedicated recreational runners seeking to extend the length of their monthly long-run, the MV 20 Miler offers the chance to combine a visit to one of the East Coast’s most beautiful shore communities with a race on a fast, USATF sanctioned course. Point to point route. The 1st 10 miles have spectacular water views and the 2nd 10 forest bike paths

Donate today to help Patrick reach his goal of $8,000